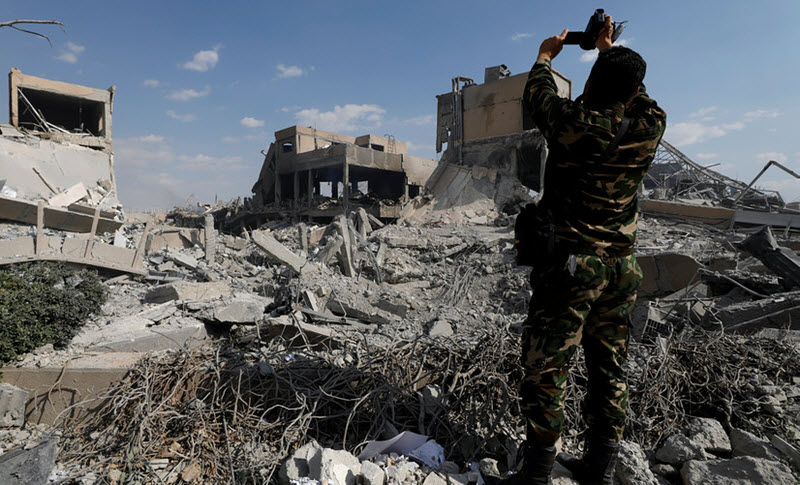 As President Trump’s 120-day deadline for fixing Iran nuclear deal gets closer, European countries are focusing on Iranian regime’s missile program and its regional intervention, calling on the regime to stop both.

Meanwhile, the missile attack by US, France and UK on Bashar Assad’s chemical weapons facilities in Syria has extremely scared Iranian regime officials.

“Considering its behavior towards the nuclear deal and Syria, how does the United States expect Iran to negotiate over its missile program?” says head of regime’s Judiciary ‘Sadegh Larijani’, adding “they’re putting forward missile negotiations in such an environment. They should be asked: how do you expect Muslim countries to trust you? Considering your approach towards the nuclear deal and your recent criminal attack on Syria, do you really expect to have negotiations with Iran?’ ” (State-run Fars news agency, April 16, 2018)

In an article titled “tomorrow’s world is the world of missiles, not dialogues”, state-run Kayhan newspaper points to possible negotiations with the West and acknowledges that the recent missile attack on Syria has been aimed at giving a warning to Iran, writing “maybe the most important point hidden in recent missile-throws has been the message the attackers intended to send to Iran. If we agree that the main purpose of the United States and its flunkies’ clear aggression on Syria was to threaten Iran and its allies and also accept the very obvious fact that we’re living in ‘the law of the jungle’ era in which the world’s bullying countries don’t even respect their own-legislated rules, then is it wise to encourage a second JCPOA-like deal and negotiate over our military and missile capabilities with countries that happen to be the same three that were involved in attacking Syria?” (State-run Kayhan newspaper April 16, 2018)

Regime’s former diplomat Soleiman Afshar meanwhile believes that the recent missile attack on Bashar Assad’s chemical weapons sites by three western countries was aimed at ‘continuing pressure on Iran and Hezbollah through bargaining with Russia and causing a rift among Iran, Turkey and Russia.”

Pointing to United States’ 120-day deadline being over on May 12, Afshar predicts that Trump “will either leave the nuclear deal or win concessions from Iran through Europe and stay.”

Afshar refers to both alternatives as pieces of a ‘US pressure puzzle’, saying “more regional and international pieces of the puzzle will be revealed in the future.” (State-run Iranian Diplomacy, April 16, 2018)

Also in this regard, state-run Aftab-e-Yazd newspaper on April 16, 2018, writes “the coming month of May will be a decisive one as the US president makes a decision on the fate of Iran nuclear deal and will also have a possible meeting with North Korean leader. It’s quite possible that Trump’s strategic decisions next month will effectively change the situation. Under such circumstances, it seems that adopting a tougher stance against Iran and the nuclear deal is going to bring him some success.”

Such comments by regime officials and media, however, point to a bigger reality. The reality of regime’s growing weakness and inability, and that it has no defensive tool to deal with the extremely dangerous situation it’s caught in.

Being defenseless against outside pressures is while the regime is also faced with people’s increasing protests at home, protests that can’t be shielded from, either, since the regime has learned from experience that its ‘oppression blade’ could no longer stop the protests from rising.

Fearing the situation, Revolutionary Guards’ Commander ‘Mohammad-Ali Jafari’ said on April 16, 2018, “we’re going through an extremely crucial stage of the revolution, with all enemies joining hands to create an environment of disappointment.”

“In addition to problems coming from outside, there are also domestic issues that should be resolved” added Jafari, somehow pointing to the escalation of regime’s international and domestic crises and the effects they have on one another.